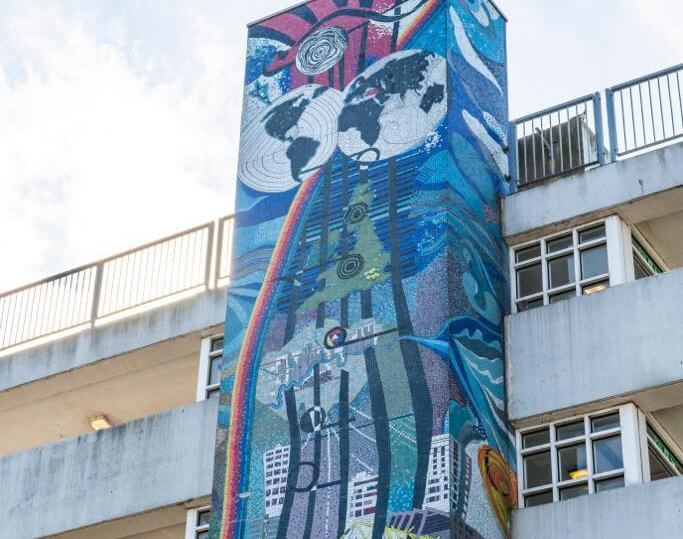 These are just a few of the concepts of conceptual art project mosaic mural which they call it a “masterpiece” with the unique Byzantine mosaic technique where painter – artist Gülsün Erbil’s intelligent mind and intellect bring together, the address is Broadwater Farm Estate, Tottenham, Haringey London.
No the concepts don’t sound like the hippies “don’t fight, make love! …slogan neither the Sex Pistols’ last concert nor the situasyonalist Guy Depord’s “The Society of the Spectacle “ especially it is not Greil Marcus’s lipstick stain from the illicit kiss that he put on modernism.

The composition of the vertical rising rainbow (symbol of change) connected to the top of the mosaic mural where there is a treble clef and inside the Treble-clef her mystical spiral composition which symbolises Love and Peace, than the silhouette of the world is open sphere and map of England from England, you come to London map, from London map you come into the Broadwater Farm Estate and you can see the buildings of the Estate, the snooker table, the chessboard, African type of long necked drums, TV inside the TV a red rose and everywhere nature pieces and abstract figures and composition is finishing with a piano of the two hands “black and white” playing the piano, it is as if they are all functional and all in harmony with some kind of differences.
When you look horizontally to the composition you can notice the notes of the Christmas carol named “Joy to the world“.

Colors, tones of colors, proportions… All, everything. And it’s as if everyone is free and everything is equal. Maybe this is the common song of plastic arts, “love and peace and harmony and equality between blacks and whites”… A symbol! And the adventure of this icon leading to “change”… But while this icon coincides with Broadwater Farm’s “Change” date, it now looks like the Icon status is gone. That’s why we say “was”. Because in the last two years, he has been so unbelievably attacked and hit so hard that he has experienced horror. Why, what’s going on, you will say. Even if the answer is not very difficult and complicated, it will still be necessary to look at the 15-16 year course of development. At least to look at the breaking points… Because Broadwater Farm Estate became famous in those years and it turned out like a nightmare. Whereas this Estate was conceived and built as a public housing project, on a vast site between Lordship Lane, Mount Pleasant Road and Philip Lane, including Glouster Road and based on the Lordship Recreation Ground, large, large apartments, including 20 floors, were built with long corridors inside. up to two thousand one-, two- and three-bedroom apartments connected to each other; terraces on the first floors, bridge-shaped open-air corridors connecting the terraces, controlled building entrances, long, wide staircases, gym, well-functioning elevators, meeting rooms managed by associations, inner streets, shops, neighbourhoods, doctor clinics, dispensary, kindergartens, kindergartens, primary school, playgrounds for children, parking spaces under the buildings, central heating heating system, water system. It’s even a huge city! But the ruling party of the period belonged to the rich-loving team. The team that does not put dust on the individual freedoms of the rich, defends even the robbery, polishes its fun, runs for fun, and takes their wishes as orders. Plus, he had an iron fist. And of course, communal living is also contrary to social welfare, and even a few regions, especially Hackney and Tottenham, are disregarded.

The majority of the BWFARM was African blacks and the minority group which they call was the Jamaican mafia.
They had drugs in their gun bags and cigarettes rolled in their mouths, smoker users vendor, distributors, subcontractors, there is always a semi-enclosed, perhaps autarkic, economic space. They control even minor civil works the stairs shop doors lounge corners are occupied so much that we can’t even pass through the site during the day even the taxis in the West End don’t want to come they just say “no”.
And the police who passed by from time to time an academic discussions focused on mass housing projects and especially Broadwater farm in the “urbanism” chairs of universities….
No change at Broadwater Farm did not begin with the riot or uprising of black people in September 1985. Although the incident was Bich the house of a female citizen of Turkish origin was burned in front of the police and the policeman was killed and the resistance continued until the morning, but it wasn’t on anyone’s heels. Nobody was saying that something was going on here that they needed to fix it. Maybe there was no one who saw the change as necessary!
But at that time the artist-painter Gülsün Erbil had moved to Broadwater Farm Estate 44, Tangmere House Willan Road and re-location coincided with the discussion of spending the art fund at Haringey Art Council.
Gülsün Erbil who was a resident at Broadwater farm luck smiles at her end the adventure of “change” began.

Immediately she started designing the composition and looking for assistants, provided her materials from Italy and worked the day and night in a short time that no one could foresee and the maturity and the quality which is a unique Byzantine mosaic technique that no one could predict this music mural was created as a work of art in two years time and moreover without receiving a large part of the allowance and it presented a conceptual contemporary art invitation to everyone.

The date is 1987.
And of course, security measures were taken by the state where armed police patrols were circulated and escorts were kept in the inner and surrounding streets where the monitors were placed all around and the guards were standing on the corners of those who spied on even the most remote places. ..
Then people of art, culture, journalists, municipal officials not only from the surrounding districts but also from London not only from the provinces and also from the universities of Britain and also from Europe including Turkey started visiting the mosaic mural at the Broadwater Farm which was named “Equality“.

Richard Rogers one of the most important English world wide famous architect said and wrote “He is an admirer of this mosaic mural“.
This, in turn, increase the secret evasive interest of the Royals and the open ceremonial interest of the political magnets. and it was decided that the Broadwater farm would cease to be abandoned to the tin neighbourhood and will be Britishised.

From now on the mouth of the bags will be opened and millions of pounds will be emptied. Images with foreign traces, including the mosaic Mural will be deleted. The composition of the population will be changed, albite by gentle means.

The estate will cease to be a mass housing project and will be privatised. For this, terraces, corridors, everything connecting the apartments will be demolished and the image of a mosaic mural which symbolises “Equality” will become history together with the terrace of Tangmere House where it is. Because when the glass balcony built at the entrance of the apartment which was not needed the black and white hands playing the piano symbolising equality and the names of Gülsün Erbil and her assistant Mahmut Bozkurt were thrown away. The notes reaching the piano where divided into two and rendered completely meaningless in the composition at the top!In other words the original full of art and symbols mosaic mural made with the Byzantine mosaic technique which represents “Equality and change” seems to be there any more!

While Hagia Sophia was being converted into a mosque the priceless mosaic icons on its walls and ceilings were covered with three layers of paint and replaced with Islamic arabesque motifs and writings.
Who will say what, if someone deletes the concepts of Art, God, Peace, Love, Equality, Change, Harmony and replaces it with English English English British British on the mosaic mural….

Art as a Genius of the Heart